Americans on the trail of their origins

Koni Ulrich, the long-time friend, host, and guide for descendants of Casper Glattfelder making the Pilgrimage to Glattfelden Switzerland wrote this article in the 19 September, 2019 issue of Der Glattfelder . Following is a rough translation of his article: 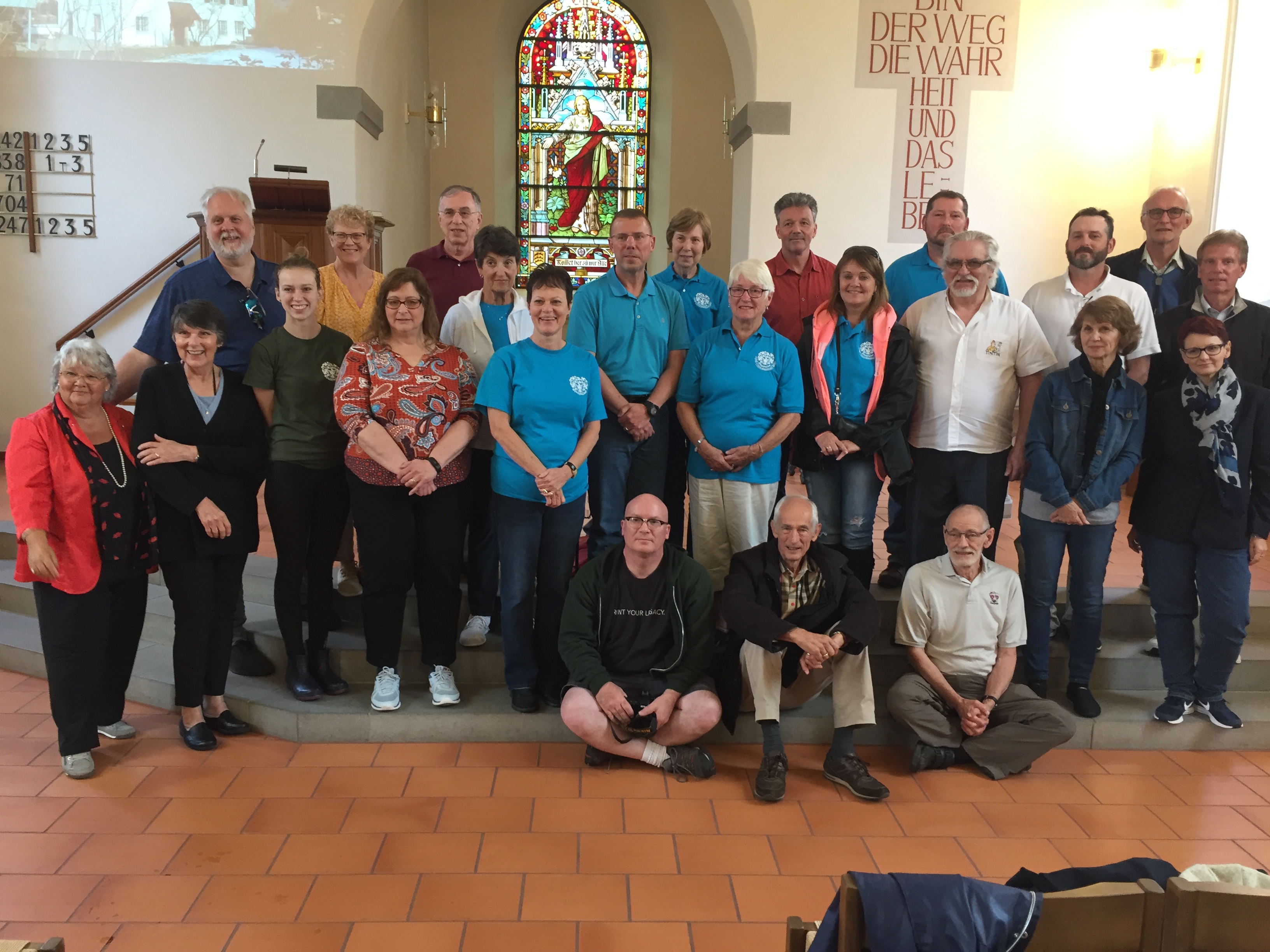 The photo (by Koni Ulrich) to commemorate the visit of Americans, Glattfelder, Winterthur and Alsatians at the Reformed Church in Glattfelden

For the umpteenth time, a tour group of the "Casper Glattfelder Association" from the USA spent a day in Casper's homeland. The guests loved the village of their ancestors - despite the prolonged rain.

Throughout the week, the 16 American guests and their guide, Debra Krebs, had been on a tour of Switzerland by bus and enjoyed beautiful weather. They had seen the Matterhorn as well as Lake Lugano. On Sunday they made a visit to the hometown of their ancestor, Casper Glattfelder. He had left his country on a ship with his family in 1743 via Rotterdam in order to gain a foothold in the district of York, Pennsylvania. Ironically, the weather on this last day of travel was not the greatest, however, this did not affect the enthusiasm of the travelers. As planned, they were picked up in the morning at their temporary place of residence, the hotel Mövenpick at the airport, and transported by tram, S-Bahn and PostBus to the village known for Gottfried Keller, where then because of the rain only small strolls, more or less in the village center, were possible. At the Gottfried Keller Center, the group was first greeted by the mayor of the municipality, Ernst Gassmann, and his wife Claudia. The Zurich-based Henry Glattfelder and the Alsatian Jean Pierre Glattfelder, like the writer, also made up the reception committee. For the special day, a trio with surname Glattfelder from Winterthur had registered. For decades, Edith and Teddy had run the photo shop of the same name on Marktgasse in Winterthur.

During their lunch of Zurich sliced meat, Sandra Glattfelder, the daughter of the two from Winterthur, told of the difficult times which the emigrants experienced after their several-week crossing to Pennsylvania. She found an equally dedicated researcher in Alsatian Jean Pierre, who, like her, is well versed in the family trees of the Glattfelder over seven generations back. Talk around the table turned to the story with Meghan Markle, the member of the British royal family who is said to be a descendant of Casper Glattfelder. After lunch, the company strolled to the cemetery, where unfortunately no Glattfelder family grave could be found. The Americans were surprised that the tombs are cleared after about 25 years and thus cannot be seen by later generations. The covered wooden bridge which was rebuilt in 1980 and crosses the river Glatt, which gave the family its name, turned out to be a favorite photo subject. It should be added that of the 16 guests, just two of them still bore the family name Glattfelder. The others were still related, most of whom had registered for the trip via the website of the Association, www.glattfelder.org.


Visit to the Reformed Church


After their lunch break, they visited the Reformed Church where Church official, Anthony Christen, explained when and how the building was built and what is happening in the church throughout the year. As a souvenir, the visitors received the almost traditional certificate with their name and a picture of the stained-glass church window. In the evening, the group enjoyed a last dinner together before flying home Monday morning.


An evening look into the guest book of the cultural center in Glattfelden showed on three full pages how much the tour group appreciated the hospitality of their namesake in Switzerland. Patty Rogers, for example, wrote: "What a pleasure to be a real Glattfelder in this beautiful place for a day!"