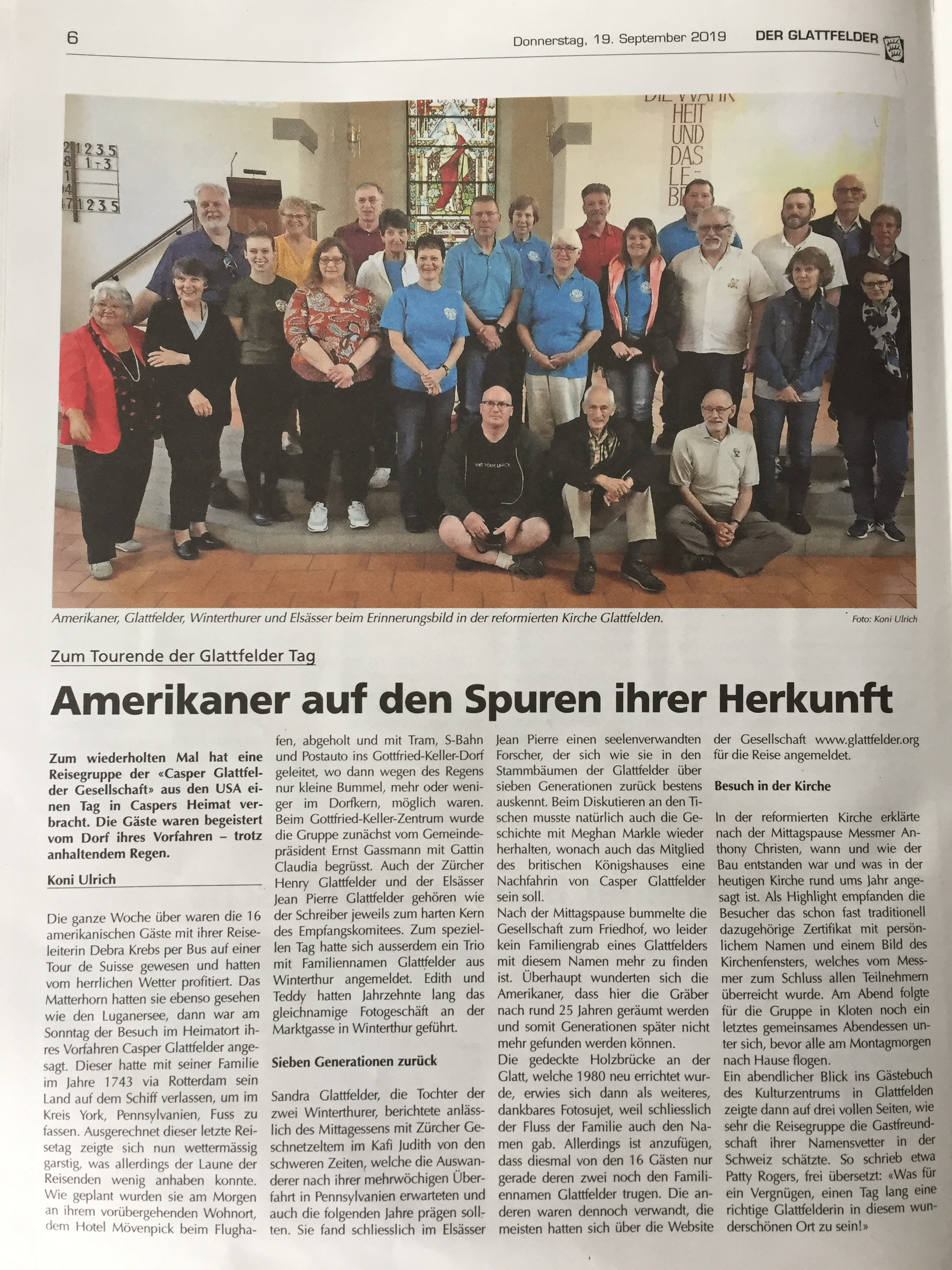 Americans on the trail of their origins

Koni Ulrich, the long-time friend, host, and guide for descendants of Casper Glattfelder making the Pilgrimage to Glattfelden Switzerland wrote this article in the 19 September, 2019 issue of Der Glattfelder . Following is a rough translation of his article:

In early December 2013, Ron Clodfelter and his wife Carole visited Glattfelden. He generously shares photos of their adventures with this link:

"It was a great experience and would recommend anyone who is interested in our family history to visit this quaint village."

* While we offer this link to you, please note that it is outside of our control, and we are not responsible for the content.

(Translation of the text of May 30th 2013 Swiss Newspaper „Der Glattfelder" by the author Koni Ulrich, for the many friends in America who asked for it, specially on facebook)

On May 23rd two young couples from Virginia came for a visit to our town. They followed the tracks of their pre-pre-pre-pre-ancestor Casper Glattfelder, who migrated with his family to America in the year of 1743. Last Thursday two young American Couples arrived in our town (or rather village, of 4500 inhabitants). They came from a business-trip to Frankfurt, Germany and thought to invest at least one day following their roots in the person of their ancestor far back, Casper Glattfelder. The four people were enthusiastic about the old center of the town, the « grey house », (built 1526), the Gottfried Keller Center (Swiss author 1819 to 1890) and the church where Casper once had been baptized, before he left his hometown.

Donnie Gladfelter, his wife Helen and their friends John and Andrea Frankovich, all in their thirties, had to do some work in the neighboring country and thought: Why not try to wander for a while on the tracks of good old Casper, our grand-grand-grand-grandfather down south in Switzerland? As they were used from their home-country, the young people from Virginia just jumped in their rental car and drove all the way south into the larger area of Zurich, (not the capital, but the biggest town in the country). So, on Thursday-morning they made it out to the Zurich Underland. They took a walk to the river Glatt (that gives the name to the village) and its newly rebuilt wooden bridge. They looked at the old logs in the grey house. Postcards with sights of the town were stamped at the near post-office, so they could later be sent home from the hotelroom.